A History of High Bids

A History of High Bids! Have you ever wondered what fetches the highest bid at auction? As you might have guessed, the big-ticket items include world famous artworks, ornate antique furniture, diamonds, and celebrity memorabilia. Let’s take a look at some of the most expensive auction items ever sold. 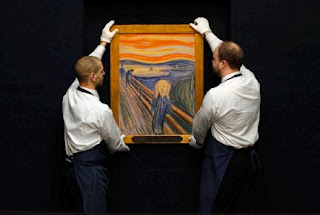 (Photo credit: REUTERS) Nearly everyone recognizes Edvard Munch’s The Scream. The iconic painting, sold by Sotheby’s in April 2012, broke the world record for the most expensive painting ever sold at auction. Twelve minutes after the bidding started at $40 million, the final offer of $119,922,500 (plus commission) came in by telephone. The mystery buyer is rumored to be New York financier and art collector Leon Black, whose art collection is estimated at $750 million. Pablo Picasso's Nude, Green Leaves and Bust was another big seller, fetching $106.5 million at a Christie’s auction in 2010. The portrait of Picasso’s lover Marie-Therese Walter was painted on a single day in 1932. 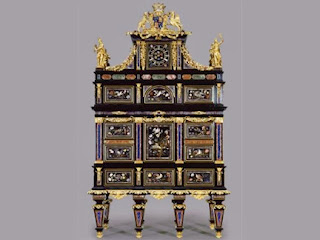 (Photo: Badminton Cabinet) The most expensive piece of furniture sold at auction to date is the “Badminton Cabinet,” with a winning bid of $36 million in 2004. The 18th century Florentine ebony chest is inlaid with amethyst quartz, agate, lapis lazuli, and other stones, certainly a one of a kind piece. The luxurious antique was fittingly purchased by Prince Hans Adam II of Liechtenstein and donated to the Liechtenstein Museum in Austria. One jewelry lover was made very happy with the Wittelsbach Diamond! Sold for $23.4 million to London-based jeweler Laurence Graff, the 35.56 carats rock dates all the way back to the 17th century, but the impressive diamond wasn’t always an easy sell. Christie’s auction house tried to sell it in 1931 but found no buyers. It was finally purchased by a private collector in 1964 and put up for auction in 2008, when it was sold to Graff. Graff reportedly made a profit by selling the diamond in 2008 to the emir of Qatar, Sheikh Hamad bin Chalifa, for approximately $80 million. 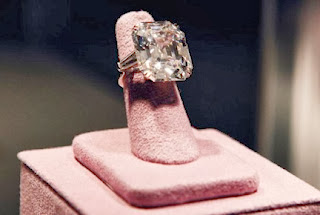 (Photo: Elizabeth Taylor’s Ring) In surprising jewelry sales, a 33.19 carats diamond ring given to Elizabeth Taylor by her fifth husband Richard Burton was expected to bring $2.5 to $3.5 million at a special Elizabeth Taylor Collection Christie’s auction in 2011. Shocking everyone but the buyer, the ring sold for $8.8 million, far exceeding the auction house’s expectations. 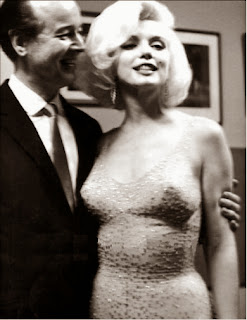 (Photo: Marilyn Monroe) We often hear of celebrity memorabilia being sold at auctions, but do you know how much they actually bring in? Marilyn Monroe’s famous dress worn to serenade President John F. Kennedy with “Happy Birthday” brought in a winning bid of $1,267,500 by Manhattan-based collectible company Gotta Have It! The dress originally cost $12,000 in 1962. It’s not just dresses that sell big at auction; tresses also make a killing. A lock of Elvis Presley’s hair got the high bid of $115,000 in 2002 by Internet auction company MastroNet Inc. A lock of Mickey Mantle’s hair sold for $6,900 and Neil Armstrong’s hair for $3,000. The New York Times delves into this trend, if you wish to read more.
Posted by Unknown at 1:24 PM 1 comment:

Sorry it has been so long since we have blogged. Today was a hectic day. Congratulations to the 42 winning bidders in today's private school liquidation auction. We look forward to seeing you all Thursday at the removal. Today we also took inventory of a storage locker in Burke, VA. There is a beautiful stainless steel 60 qt. Hobart mixer, an Old Hickory rotisserie oven, Bizerba deli slicers, Hobart Quantum scales, bread slicer, Hobart 30 qt. mixer, 2010 refrigerated merchandiser, & more. This auction will post tomorrow. We posted an extremely urgent office furniture auction. This auction has 10 Herman Miller Aeron chairs, 40+ leather conference chairs, & much more. This auction will be closing next Tuesday. Do not miss out, there are sure to be some great deals. We also posted the gorgeous Darnestown estate. This auction should be opening for bidding tomorrow. We also added a bunch of inflatables to the New Jersey party rental auction. Kudos to our entire team for such a productive day. To view our complete auction calendar, go to Capitol Online Auctions
Posted by Unknown at 5:30 PM 1 comment:

Today was a busy day. We had 2 auctions that closed. Congratulations to all of the winning bidders! We also had 3 teams taking inventory of a complete pizza shop in Philadelphia, a restaurant liquidation in Burtonsville, and a gorgeous restaurant furniture auction that is in Rockville, Maryland. We are hoping to have all 3 of these auctions posted tomorrow. We do have 5 auctions opened for bidding right now. For the details, go to http://www.capitolonlineauctions.com Happy Bidding!
Posted by Unknown at 6:31 PM 2 comments:

Inflatable Rental or Indoor center business owner’s sometimes underestimate the need for insurance or simply do not know that they are not properly covered. First off, let us stress how important it is to have coverage for your inflatable business. Do you think that accidents are very rare in bounce houses? Think again, according to the Pediatrics Journal an average of 31 children per day are hospitalized because of injuries that were caused by a jumper. That adds up to around 11,000 kids per year; this estimate is not including the number of adults that are injured due to rough housing on devices. If someone is injured on one of your inflatables, the medical bills and defense costs if you are sued can add up quite quickly. Still think you don’t need insurance?

1) General Liability insurance: This coverage will provide defense coverage in case you are sued for your negligence or your employee’s negligence.

2) Inland Marine: Protects your property in case of fire, theft or vandalism.

3) Worker’s Compensation is a requirement in most states if you have employees & will cover things such as medical bills, loss of income & bodily injury for employees.

4) Commercial Auto: If you use your vehicle for business purposes it will not be covered under your personal auto insurance policy, trailers need to be added on separately to have coverage as well.

If you are interested in learning more about how to keep your inflatable business safe the CIA has a series of videos that outline ways to protect your business and also explain the different kinds of insurance in detail. You can watch the videos at http://www.weinsureinflatables.com/inflatable-resources.html

Posted by Unknown at 5:41 AM No comments:

We have a huge week of auctions upcoming.  There is a complete auto shop liquidation, party rental auction, office equipment/furniture, 1 year new restaurant equipment auction, restaurant equipment distributor liquidation, and Persian handmade rug auctions closing.  You can find all of the details at Capitol Online Auctions
Happy Bidding!
Posted by Unknown at 9:29 AM No comments:

Congratulations to all of the winners in the Quiznos auction that closed today.  For those that missed out, there is an auction closing tomorrow, Tuesday, February 26, 2013 that has many pieces of equipment from another Quiznos, as well as hundreds of other great pieces of restaurant equipment/furniture.  To see the full catalog, go to Restaurant Equipment Auction
There is also a party rental auction closing tomorrow.  There is a box truck, 2 dunk tanks, a forklift, concession equipment, arcade machine, casino equipment, and much more.  To see the full catalog, go to Party Rental Auction
We are working on adding more items to the office furniture auction that is closing on Thursday.  We will have these new additions posted by tomorrow afternoon.
Tomorrow, we will also be posting the complete auto shop liquidation.  There are 2 lifts, a 26' box truck with lift gate and built in generator, battery chargers, transmission jack, tools, refrigerant recovery system, and much more.
Thanks for taking the time to read our updates.
Happy Bidding!
Posted by Unknown at 5:54 PM No comments:

Welcome to the blog of Capitol Online Auctions. Check out the home page of the site for a list of current and upcoming auctions.